A compass for the future of Cologne

How can the city of Cologne cope with urban growth today and in the future? How must the transport network change against the backdrop of a sustainable mobility revolution? Where does urban production find its place? What about open spaces in a growing city? And what social and cultural facilities does it need? As a growing metropolis with finite land resources, Cologne faces numerous challenges. In order to design a compass for future-oriented, strategic and sustainable urban development, the city, together with urbanista, ASTOC and urbanista.ch (formerly: bureau für RAUMENTWICKLUNG), developed the integrated urban strategy "Cologne Perspectives 2030+" by mid-2020. In a broad, multi-stage work process with more than 40 departments and the urban community, a guide for Cologne's urban development was created: The "Cologne Perspectives 2030+" show where and how actors from politics, administration, business and urban society should join forces in the coming years to further develop Cologne as a livable metropolis.

With this question in mind, the city set out in summer 2018 to develop a shared vision and strategy for the future. As a metropolis, the hub of a dynamic region and Germany's fourth-largest city, Cologne, like many other cities, must face the challenges of global developments: Population growth, climate change, the mobility revolution, changes in the age structure, economic change, globalization and digitalization. The "Cologne Perspectives 2030+" address the future problems and opportunities of the growing metropolis on the Rhine, identify Cologne's specific circumstances and tasks, and build specifically on the city's strengths in its further development. The city strategy thus puts Cologne in a position to meet and actively shape the diverse challenges it faces. Birte Kepp (urbanista) -
"What this concept depicts is, on the one hand, an all-encompassing view of the city with a 360-degree perspective. On the other hand, we have gone concretely into the urban spatial level. We haven't had the combination and depth of content of the two perspectives like this in other projects."

In order to secure and enhance its qualities as a competitive, climate resilient, diverse and livable city, the city is taking the tailored "Cologne Way" approach. This approach is characterized by the interplay of two perspectives: While the "360-degree perspective" deals with all relevant fields of action of Cologne's urban development, takes a look at overarching challenges and derives a comprehensive target framework with five guiding principles and 27 goals, the "urban spatial perspective" deals with the spatial future of Cologne. It illustrates how Cologne's urban structure must be further developed in its spatial dimension in order to achieve the goals of the "360-degree perspective". At the same time, the "Urban Spatial Perspective" provides answers to the question of how Cologne can and should develop in the future in order to make the best possible use of the scarce resource of land, to satisfy existing and future demands on space in a sustainable manner, and to strengthen its spatial cohesion. With 13 approaches to spatial development, five differentiated thematic target maps, a city-wide spatial model, and seven designated future spaces, the "Cologne Perspectives 2030+" offer a comprehensive set of tools for the strategic further development of settlement, industrial, and commercial areas, the open space structure, and the higher-level transportation infrastructure. The link between the two perspectives are ten proposals for recommendations for action: They describe the most important thrusts for the future urban development of Cologne and show how the formulated goals will be achieved.

Ecological, economic and social sustainability, plus the major trends of the future: the guiding principles of the "Cologne Perspectives 2030+".

The "Cologne Perspectives 2030+" are based on existing preparatory work - including the Council resolutions on "Strategic Urban Development," the "Guiding Principles 2020," "Sustainable Urban Development" and the "Growing City" - and develop these further with a view to concrete recommendations for action. As Cologne is particularly committed to sustainability, the basic principles of the United Nations' (UN) Sustainable Development Goals (SDGs) were incorporated into the target framework of the city strategy, as were the values of the "Leipzig Charter on Sustainable European Cities": social justice, economic rationality and ecological responsibility thus become the guiding principles of the "Cologne Perspectives 2030+". In order to include not only developments that are already easily foreseeable today, the city strategy is also based on the findings of the research project of the Federal Institute for Research on Building, Urban Affairs and Spatial Development "City of the Day After Tomorrow", in which urbanista also participated. 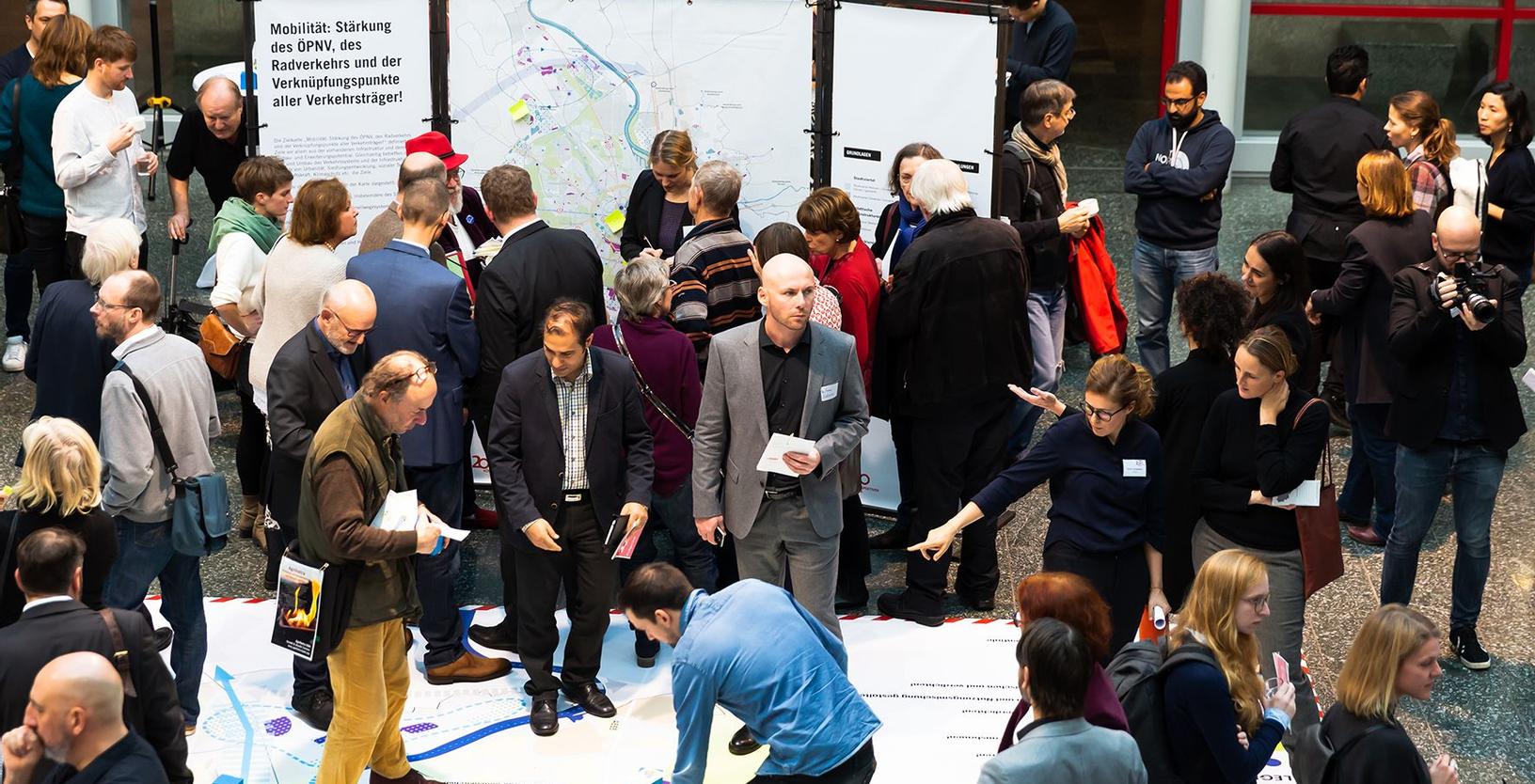 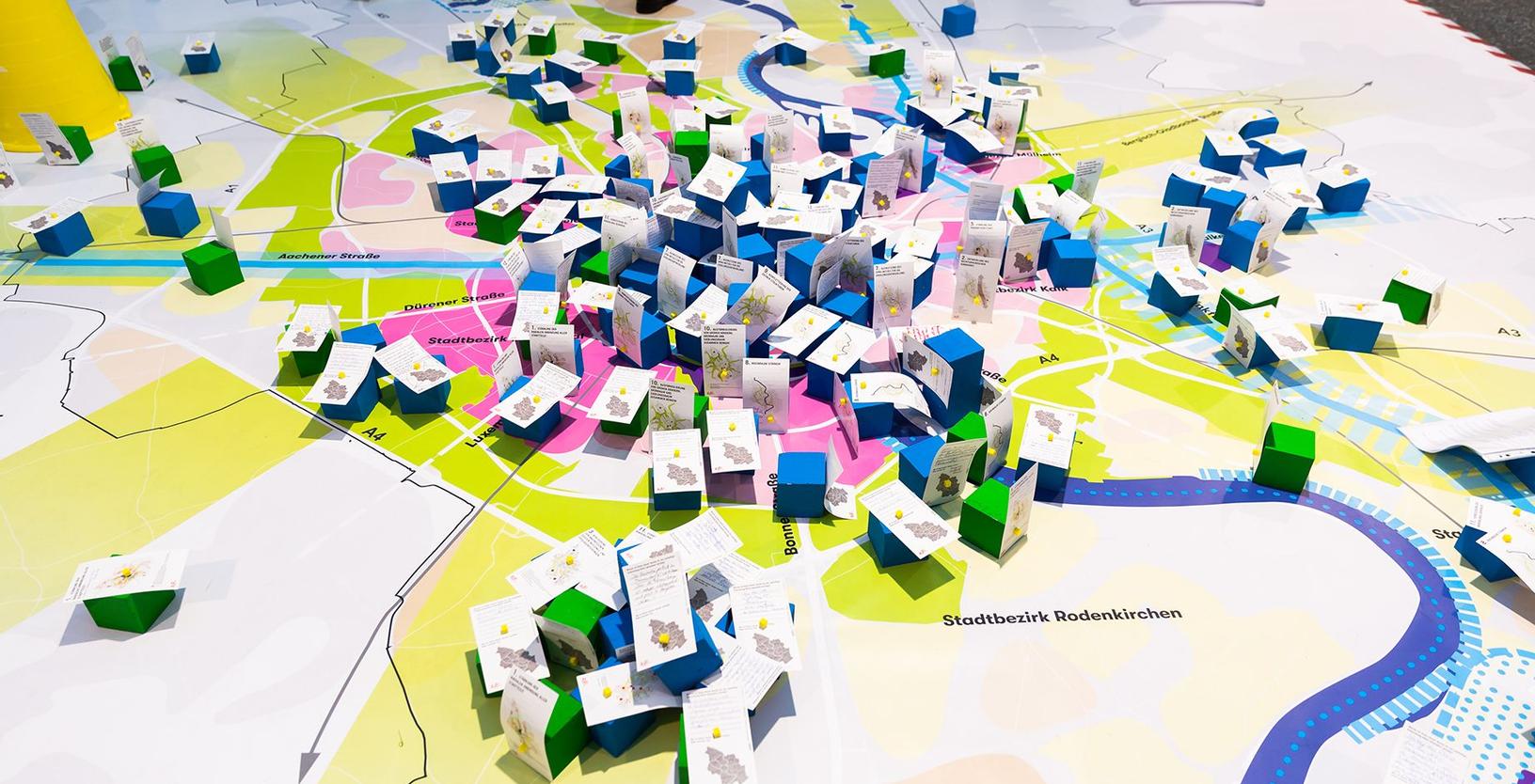 In order to meet the diverse challenges of the future in a targeted and active manner, integrated urban development is needed that takes into account all the departments involved and pools their knowledge and planning. The "Cologne Perspectives 2030+" focus on thematic networking and targeted exchange - not only across departments and divisions, but also between the city administration, external experts and urban society. Under the leadership of the Office for Urban Development and Statistics, four interdepartmental thematic teams identified core topics in the fields of action "Urban Cologne," "Productive Cologne," "Open Cologne" and "Networked Cologne" in a preliminary process and worked out their strengths and weaknesses as well as opportunities and threats (SWOT analysis) - the interdisciplinary cooperation of 47 specialist departments and agencies thus ensures an integrated and cross-thematic perspective on the relevant topics of Cologne's urban development. In a constant exchange with the city's top management, especially with the City of Cologne's administrative board, the target framework of the city strategy took shape in several internal administrative workshops. Last but not least, city discussions in every Cologne district gave citizens the opportunity to contribute and discuss future issues affecting the city as a whole and the districts. In several future forums with linked online dialogs, the work status was fed back to the (expert) public so that citizens could participate in the development of the city strategy and sharpen both the target framework and the spatial model step by step. With the help of this integrated working method, it was finally possible to design a compass for the future of Cologne. 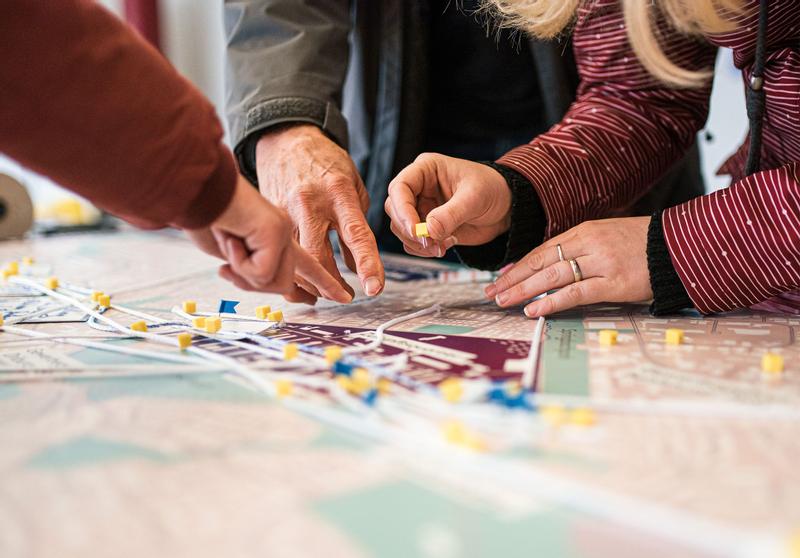